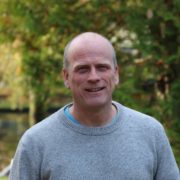 Dag has more than 20 years of experience as a journalist and editorial director. Curiosity on innovation led him to VIS in October 2019, where he works with visibility for both the company and start-up companies. Dag believes in innovation as a revolutionary force, and is extremely curious about new projects.

Previously, he has  studied comparative politics at the University of Bergen and journalism at OsloMet, and holds a master’s degree in international politics from the London School of Economics and Political Science. He recently started his second master’s degree as a part-time law student at UiB.

He otherwise runs a three-child family, and is engaged in volunteer work. If he is to really let his mind fly, he folds out the paraglider and leaps out of Ulriken on a sunny day.